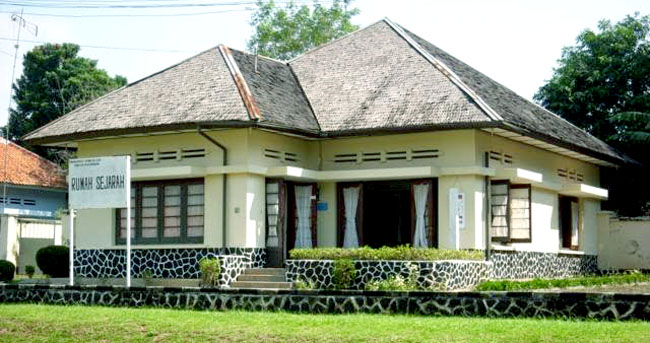 Those who live in Indonesia are indeed familiar with Kalijati Pact, as the part of the history of the nation. Well, such agreement was formed in a particular house located in West Kalijati Village, Subang Regency Indonesia. No wonder, tourists often come to the site in order to learn the history and explore the house for its unique nuance. Thanks to the good management done by the local government. This building has become a new tourist attraction (museum), providing both information and interesting ambiance to visitors. So, what can tourists find inside?

The Nuance
In terms of design, Kalijati Historical House is similar to regular local houses. It doesn’t look special at all, in fact. In front of it, there is a signboard stating the name of the building “Rumah Sejarah). A grassy yard resides in front of this house (with some small plants), as well. What about the size? Well, despite the small size, the house emits a strange nuance which is both sacred and thrilling. This explains why some tourists are interested more in its mystical aura rather than the history.

Exploring Kalijati Historical Site
Kalijati Historical House resides within Suryadarma Airbase area. No wonder, tourists can easily find the location even without the help of a tour guide. It consists of several rooms including living room, 3 bedrooms, back room, and middle room. Once the guests enter the living room, they may find a vitrine, storing a small inscription! Such historical epigraph is the proof of the surrender of the Dutch Army during the war against Japan in Indonesia. Located next to the inscription, there is a pair of swords as well.

The next exploration should be done in the middle room, where a rectangle table resides. It was used for meeting back then. Not to mention 8 old chairs are located near to the table. Each of the chairs has a name on it, which belongs to the representation of the Dutch and Nippon who attended the discussion in the past. What is more? After exploring the middle room, it is the time to enter the bedrooms. On these rooms, the guests can find several historical photos during the evolution of authority between the Dutch and Japan.

Another interesting allure of Kalijati Historical Site is its mystical nuance. According to the locals, this house is considered haunted due to several strange events that happened back then. Some people even said they had witnessed moving chairs and the presence of astral beings sitting those chairs. Despite lacking proofs, tourists find it interesting for sure.

How to Get There
From Subang City in Indonesia, a trip to Kalijati Historical Site takes about an hour. It is because the distance is about 26.1 km. First, they need to head to Kalijati Sub-District. Later, they can simply reach West Kalijati Village and visit such historical house right away. As for the route, make sure to take Raya Dawuan – Subang Street.