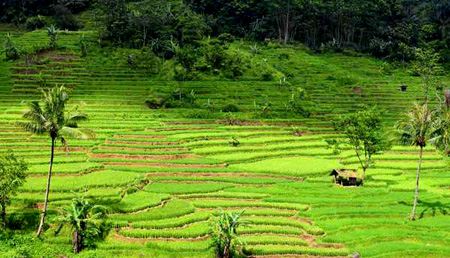 Subang Regency is the home of several interesting tourist villages and one of them is located in Jalancagak Sub-District in Indonesia. The name is Wangunharja Village, actually. Here is the question. What makes it special? For visitors, the village can witness daily routines of the villagers that represent the culture of Sundanese. Not to mention they have the opportunity to enjoy numerous types of local traditions directly. On top of that, they can learn how to live like those people! The presence of homestays makes it possible to spend more than one day in Wangunharja after all.

The Nuance
In terms of nuance, Wangunharja Village offers to bother peaceful and homely atmosphere. People who live in this settlement do not apply modernism to their daily living. Instead, they retain their culture and traditions and live in a modest way. No wonder, traditional houses become the dominant feature of the village. Aside from these, the site features stunning views of mountains and unspoiled nature. As for the facilities, tourists can find several homestays to rent. What about the villagers? They are friendly and calm. Moreover, most of them work as a farmer!

Exploring Wangunharja Village
The first allure of Wangunharja Village is a tradition called Ruatan Bumi. This traditional ceremony represents villagers’ gratitude towards God due to the abundant harvest. The fact is that the majority of the locals work as a farmer! No wonder, they depend on their farms to accommodate their life. When the harvest is abundant, they may perform such ceremony led by the head of the village. Aside from showing gratitude, the ritual has the function to prevent misfortunes in the future. The good thing is tourists are allowed to either watch or join the ceremony!

What is more? Aside from Ruatan Bumi, the village has other rituals and one of them is called Ngabeungkat. The locals conduct such ceremony in order to welcome the rainy season. It also becomes the sign of the beginning of a farming season. What about the procession? The villagers may gather in an open field in order to perform an animal sacrifice (usually goats). Later, they will get rid of the blood of the animal by throwing it on the river. The last thing to do is to place offerings on the riverbed.

For those who want to spend more than a day in Wangunharja Village, they can either stay in nearby hotels or in villager’s house. The second option gives them a distinct experience, though. It is because they can get close to villagers and watch their way of living directly. Interested?

How to Get There
For those coming from Subang City Indonesia, their prime destination is Jalancagak Sub-District. Later, they can go to Wangunharjo Village right away. The distance between Subang and the village is 26.7 km, actually. That means the trip would take about an hour to get to the site. As for the route, make sure to take Tambak Mekar – Kaso Malang Street.