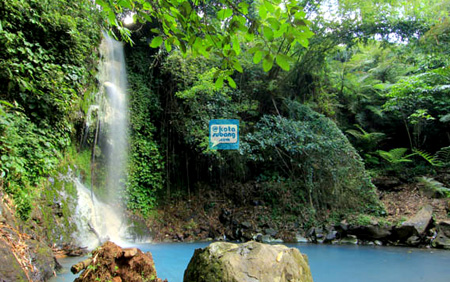 Subang Regency becomes a great vacation destination when visiting West Java Province of Indonesia. Why is that? It is the home of tons of beautiful waterfalls, including the one called Koleangkak or Curug Kaliangkak. The location is in Nagrak Village and it belongs to Ciater Sub-District. Aside from offering the flawless beauty of nature, the foreigners once used the site as one of their shooting locations for a movie “Savages”. Due to such popularity, more people keep coming to the site to conduct numerous activities like sightseeing, photography, and swimming.

The Nuance
In terms of nuance, Koleangkak Waterfall or by locals called Curug Kaliangkak indeed offers mesmerizing beauty and serene environment. Some bushes and trees grow near to the falls as well, offering a shady atmosphere. Still, the best feature of the site is the small lake that resides under the waterfall. This natural pond has the color of blue Tosca, with a milky appearance. Not only it is refreshing, the small lake also looks so artistic. Here is the thing. No facilities are available, so tourists won’t find toilets and eateries there. Instead, they can carry snacks and bottled water to the location (littering is prohibited, though).

Exploring Koleangkak Waterfall
The allure of Koleangkak Waterfall has attracted both locals and outsiders. These people have the same motive, actually. It is to collect great pictures of the falls and share them on social media sites. Not to mention they take advantage of the site for selfies! The best background is indeed the waterfall, but visitors should not miss the opportunity to take pictures of the stunning lake located under the falls. The mesmerizing blue Tosca color of the lake looks so hypnotizing after all.

No one can explain why the small lake has such kind of color. However, according to the locals, it is due to the presence of boulders that reside on the bottom of the pond. It has the color of white, appearing like limestone rocks. This kind of natural phenomenon is somehow similar to that of Bintan Island’s lakes! Despite such luring appearance, tourists are not recommended to get in the pond or swim in it. Why is that? The water contains high acid, so it is not quite good for the skin. Even no fishes live there.

With the height of about 4-5 meters, Koleangkak Waterfall is always ready to amuse visitors. Another important fact regarding the falls is related to the pond. The color never changes regardless of the weather (even during heavy rain). That means all tourists are able to witness such beautiful pond anytime!

How to Get There
For those coming from Subang City Indonesia, their first destination is Ciater Sub-District. Later, they only need to visit Nagrak Village where the waterfall resides. The whole trip takes about an hour, as the distance is 27.3 km actually. What about the route? The best one is Raya Cijambe Street. It is also recommended to hire a local guide to get to the site efficiently.