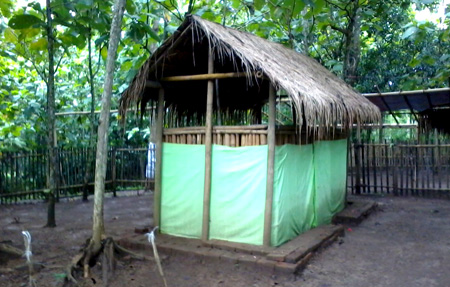 Not all travelers know that Subang Regency also has several sacred sites for them to visit, especially to conduct a religious tour. For example, there is Nay Subang Larang sacred site located in Cikaum Sub-District in Indonesia. To be exact, it resides in Naggerang Village and located in the midst of a teak forest. So, what can tourists do there? As the name suggests, the site becomes the home of several historical heritage of Subang Larang. That means visitors can learn the history of the site while witnessing numerous types of valuable objects directly.

The Nuance
The collection of historical objects located in Nyai Subang Larang Sacred Site is called Astana Panjang or Muara Jati. However, no one knows the history behind those objects. One thing that tourists can be sure of is that the objects have been there since the 1980s. Not to mention the grave of Subang Larang also resides there, which is the prime attraction of the religious tour. The tomb is covered by a small hut, wrapped by green fabric as well. In terms of nuance, it is indeed mystical and a little bit creepy.

Exploring Nyai Subang Larang Sacred Site
The prime allure of Nyai Subang Larang Sacred Site is the history. It even became the witness of the life of Prabu Siliwangi’s wife! Due to such interesting fact, the majority of visitors come to the site to get further information regarding such history. No wonder, they may hire a local guide in order to get a thorough story and tips about the sacred site. This person even may show the location of Gelok’s Tomb (the loyal butler of the princess).

On the site, tourists can also take advantage of the serenity of the teak forest. It helps them to relieve stresses somehow, despite the thrilling ambiance. In order to overcome the jitters, it is recommended to visit the site in the morning or at noon. Some locals, though, choose to come at night! It is because they want to perform rituals and pilgrimage in a more solemn manner. However, it would be a scary experience for tourists, no?

There is a common rule for everyone. All visitors should not cause too much noise and havoc during the visit. They must give respect to the sacred site and behave well regardless of their purpose in visiting the site. Those who want to do pilgrimage, for example, must wear neat clothes and should not touch the gravestone. Also, for a more appropriate pilgrimage, they should get a local guide beforehand.

How to Get There
From Subang City, travelers need to take a local transportation service and head to Cikaum Sub-District immediately. Later, they only need to visit Naggerang Village where the sacred site resides. The distance is 22.9 km, so the trip may take about 45 minutes. It can even be faster if tourists take Subang Pamanukan Street. The site resides in the middle of a teak forest, so it takes shot trekking as well.